The Brookings Interfaith Council will next gather at 6:30pm on Thursday, January 8, at the Brookings Public Library. Our customary potluck will be followed by a broad-ranging discussion regarding "end of life" issues.

As people of different faiths approach the end of their lives, they and their families commonly face a variety of difficult tasks and decisions. Examples include:

Please bring a potluck dish to pass, if you're able, or just show up for the evening. All are welcome. Invite a friend. Please be aware that many in our interfaith community do not eat pork or may be vegetarian.

December 11th Potluck to Focus on Religion and Economic Justice

Our evening will begin with a potluck. We will then move into a discussion of religion and economic justice, with a special focus on what is being done locally to alleviate suffering due to hunger and other symptoms of economic disparity.

Please bring a dish to pass, if you're able, or just show up. All are welcome. Invite a friend. Please be aware that many in our interfaith community do not eat pork or may be vegetarian.

Posted by Phyllis Cole-Dai at 9:59 AM

"An Israeli in Palestine": Dialogues with Dr. Jeff Halper


Please join us for one of these presentations by Dr. Jeff Halper. The BIC dialogue with Dr. Halper will be held at 7pm on Thursday, November 6, at the Brookings Public Library. Please note: There will be no potluck at this event.

Halper is an Israeli anthropologist, a human rights activist, and the coordinating director of the Israeli Committee Against House Demolitions (ICAHD), an organization dedicated to ending Israel's occupation of the West Bank and demolition of Palestinian homes.

He has become a major voice against Israel's policies against Palestinians in the West Bank and Gaza.

Help us welcome Dr. Halper to our community as together we struggle to understand a very difficult situation in the Middle East that has implications around the world. 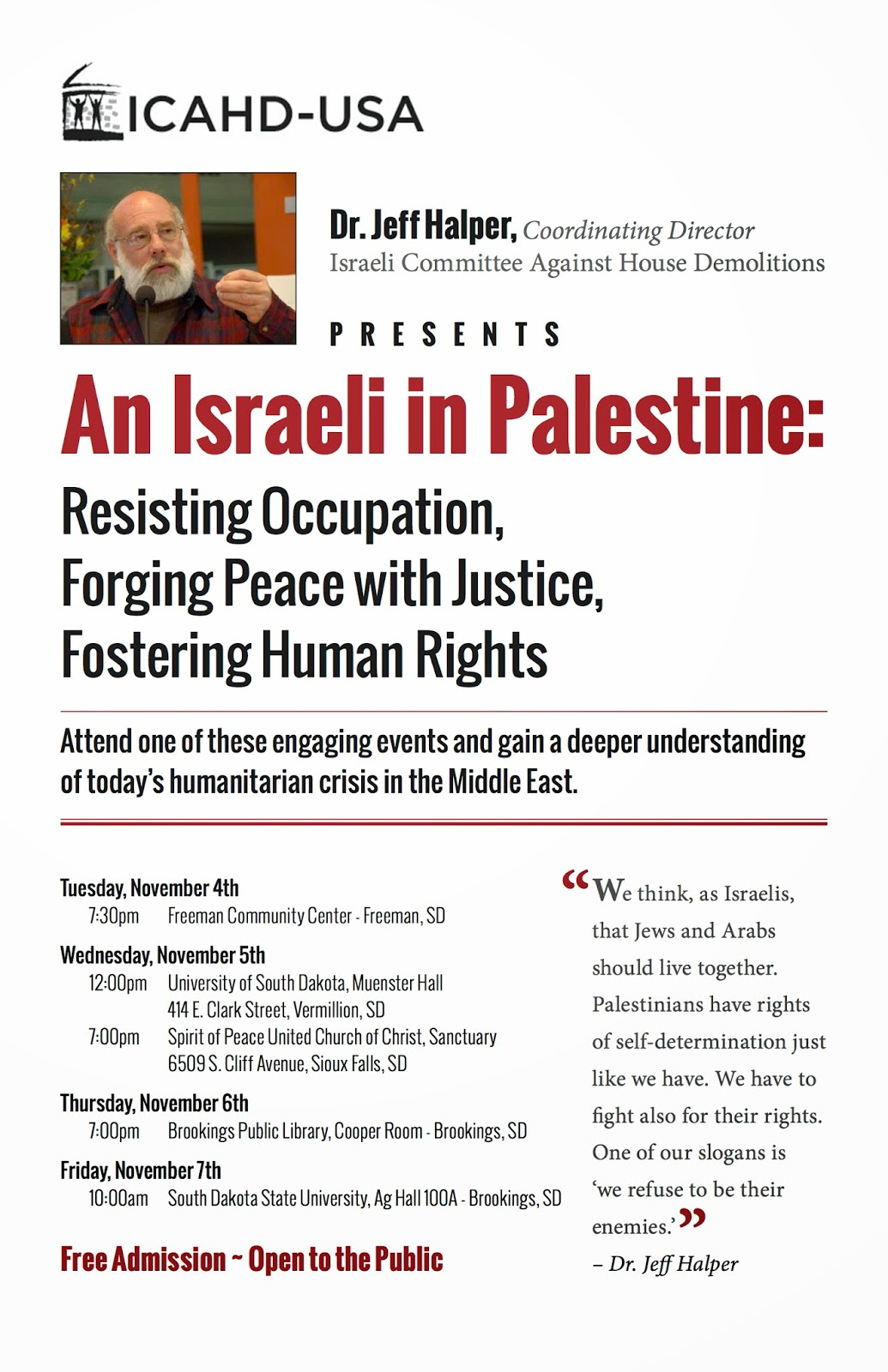 Halper is an Israeli anthropologist, a human rights activist, and the coordinating director of the Israeli Committee Against House Demolitions (ICAHD), an organization dedicated to ending Israel's occupation of the West Bank and demolition of Palestinian homes.

He has become a major voice against Israel's policies against Palestinians in the West Bank and Gaza.

In anticipation of this visit, First United Methodist Church of Brookings has provided BIC planning team member James Murphy a venue to speak about the modern history of this conflict. Murphy teaches religion at South Dakota State University.

At 10am each Sunday from October 5 to November 23, in the Community Life Center, Murphy's forums will look at formative moments in the emergence of the modern conflict. The series will center on an autobiography of a Palestinian Christian who grew up in Galilee during the years of the formation of the modern state of Israel.

Posted by Phyllis Cole-Dai at 7:24 AM

The Brookings Hindu Community will host the next BIC event on Thursday, October 9, 2014, at 6:30pm. It will be held at the Brookings Islamic Center, 724 11th Avenue.

Yes, that's right, our Muslim friends will provide the venue for this celebratory evening being hosted by our Hindu friends. BIC is grateful for this interreligious cooperation.

The evening will start with a Hindu prayer, followed by a vegetarian dinner cooked by local Hindu families, a presentation highlighting various Hindu festivals in October, and small group discussions. It will conclude with Shanti Path (Hindu Prayer for Universal Peace).

All are cordially invited and welcome to attend this event. We hope to see you on October 9th!

Posted by Phyllis Cole-Dai at 1:13 PM

Announcing Our First Interfaith Potluck of 2014-2015

Our Muslim friends will lead us in a discussion of self-discipline, based on their practice of "jihad," frequently misunderstood by non-Muslims. Come add your perspective on self-discipline from your own faith tradition.

Please bring a dish to pass, if you're able, or just show up. All are welcome. Invite a friend. Please be aware that many in our interfaith community do not eat pork or may be vegetarian.

Also, please mark your calendars! With some exceptions, we plan to meet at 6:30pm on the second Thursday of each month during the school year. Below are the dates and locations for this fall. Additional details will be forthcoming.

Come to a Discussion on Faith & Poverty

The Brookings United Church of Christ invites the Brookings Interfaith Council to share in a program of its “fifth Sunday” series that will deal with poverty and what we can do to respond to immediate need, as well as overcome some of its root causes. The presenters will be Patty Bacon and Lisa Marotz, both of whom have extensive experience in working with the causes and the impact of poverty. The program will be held on September 14th beginning at 12:00 noon at the Church, 828 8th St. South. Participants are invited to bring a bag lunch. Coffee and water for tea will be available.

Email ThisBlogThis!Share to TwitterShare to FacebookShare to Pinterest
Labels: poverty

Come to a Picnic!

The Brookings Interfaith Council invites you to a picnic on Wednesday, June 18, in Shelter C at Hillcrest Park. We will begin with a potluck meal around 5pm. The shelter is reserved until dark, so we'll have plenty of time for fellowship. There will be no formal program. Drop by or stay for the entire event.

Bring a dish to share if you can. You might also wish to bring outdoor toys or games for the children and a comfortable lawn chair.

Join us if you can!

Next BIC Potluck to Feature "Years of Living Dangerously," Discussion

The public is invited to attend the next Brookings Interfaith Council gathering at 6:30 pm on Thursday, May 1, at the Brookings Public Library.

Our evening will begin with a potluck. Please bring a dish to share, if able, or just show up.

Around 7:00 pm we will screen the series premiere of Years of Living Dangerously, a nine-part series just launched by Showtime about climate change and its effects on the human family. Produced by Oscar-winning James Cameron and other Hollywood icons, the ground-breaking series is being heralded as "perhaps the most important climate change multimedia communication endeavor in history." You may view the trailer below.

In this first of nine episodes, Don Cheadle reports on the severe droughts in the Southwest United States, following scientist and devout Christian, Katharine Hayhoe, as she tries to communicate to religious audiences the connection between extreme weather and climate change. Harrison Ford also visits Indonesia to learn about deforestation and the struggle to resist it. And Thomas Friedman investigates how drought contributed to the civil war in Syria.

Following the hour-long screening, we will discuss the film and some of the issues it raises from the vantage points of our various faith perspectives.

We hope to see you on May 1st!

Note: If you can't see the viewer above, click here to watch the trailer. You may also watch the first episode in its entirety here.

Posted by Phyllis Cole-Dai at 2:45 PM

Email ThisBlogThis!Share to TwitterShare to FacebookShare to Pinterest
Labels: Brookings, climate change, faith and the environment, Years of Living Dangerously

Last night the Brookings Interfaith Council gathered at the Brookings Islamic Center to celebrate with members of the Hindu community their New Year (Vikram Samvat 2017) and Lord Rama's birthday. After a splendid meal prepared by our Hindu friends, the significance of these holidays was explained briefly by Dr. Chandradhar Dwivedi. Then Dr. Sanjeev Anand delivered a short Powerpoint presentation that offered additional insight into Vikram Samat and the Hindu calendar.

You may view the Powerpoint presentation here.

Following some discussion of the presentation, the gathering adjourned so that individuals might either participate in or observe the Muslim community's evening prayers, being held at the Center. The invitation to non-Muslims to attend was received with gratitude by the Council, and many members were heard to say afterwards how moved they had been, witnessing the prayers.

It isn't often that a Muslim community hosts a Hindu celebration, especially with Jews, Christians, Baha'is, Buddhists and agnostics also present. The evening was a remarkable time of sharing across religious and cultural divides. BIC warmly thanks the Brookings Islamic Center for its hospitality and the Hindu community for both the incredible feast and the informative presentations it prepared for the gathering.

Happy Vikram Samvat, everyone! And may the blessings of Lord Rama be upon us all.

Posted by Phyllis Cole-Dai at 9:22 AM

Celebration with Hindu Community Rescheduled for 4/8

Our celebration with the local Hindu community of Lord Rama's birthday as well as New Year 2071, postponed tonight due to a winter storm, has been rescheduled. It will take place at 6:30 pm next Tuesday, April 8th, at the Brookings Islamic Center. The Brookings Interfaith Council is very grateful to the Muslim community for this expression of good will and hospitality.

The Brookings Islamic Center is located at 724 11th Avenue. We hope to see you there Tuesday night!

We regret that tomorrow night's celebration with the local Hindu community of Lord Rama's birthday as well as New Year 2071 must be postponed due to a winter storm. We hope to reschedule soon. Details will be announced as soon as we have them. Be warm and safe, everyone!

Posted by Phyllis Cole-Dai at 7:02 PM

The next BIC dialogue will be held at 6:30 pm on Thursday, April 3, in the Cooper Room of the Brookings Public Library. It will be hosted by the Hindu community, whose members invite the public to celebrate with them the birthday of Lord Rama as well as New Year 2071, both of which fall around this time.

Members of the Hindu community will describe the significance of these holidays and also answer questions about their faith. The discussion will take place after a vegetarian meal they have prepared.

Dr. Chandradhar Dwivedi, priest of the local Hindu community and member of the BIC planning team, explains that "Lord Rama was the seventh incarnation (or avatar) of Lord Vishnu, the God for preservation in the Hindu Trinity. Lord Vishnu incarnated as Rama to destroy the demon Ravan and his evil forces at that time."

Hindus worship for eight days leading up to Lord Rama's birthday, known as Ramanavami. They then celebrate Ramanavami with special festivities "on the ninth day of the bright fortnight of the Hindu month Chaitra" (March-April).

On April 3 BIC will also help celebrate the Hindu New Year, which is based on the lunar calendar Vikram Samvat. That calendar was established in 57 BCE by King Vikramaditya of Ujjain. Though there are regional differences within India, many Hindus mark the start of the New Year "on the first day of the bright fortnight of the Hindu month Chaitra" (March-April).

Both of these celebrations--Ramanavami and the Hindu New Year--are usually observed with special prayers and feasting with family, relatives and friends.

Please share in this auspicious celebration and learn more about the Hindu faith. Once again, a vegetarian meal will be provided by the Hindu community. Bring your good will, kindly heart, listening ears, and questions!

Posted by Phyllis Cole-Dai at 2:34 PM

Our﻿﻿ next event, co-sponsored by the Brookings Interfaith Council, SDSU Interfaith Council, and the Office of the Dean of Students, will be held February 19, 2014, at South Dakota State University. Details are in the poster below. This will be an important opportunity for students to share their perspectives and experiences as persons either of faith or non-faith on campus.

Despite our usual custom, this event will not include a potluck meal, due to factors beyond our control. Please eat dinner before you come. 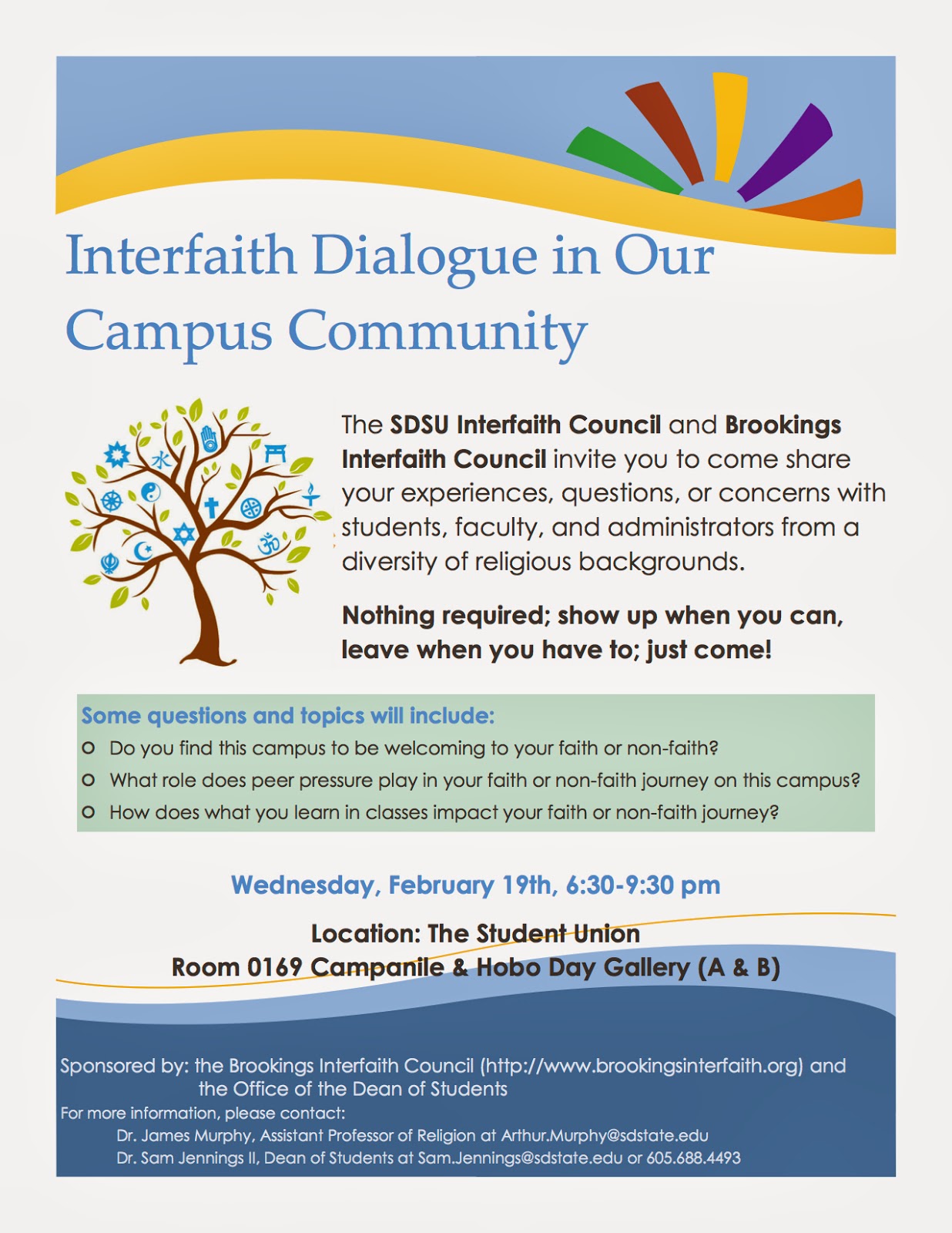 Posted by Phyllis Cole-Dai at 8:17 AM